Trade was vital to Ancient Rome. The empire cost a vast sum of money to run and trade brought in much of that money. The population of the city of Rome was one million and such a vast population required all manner of things brought back via trade. 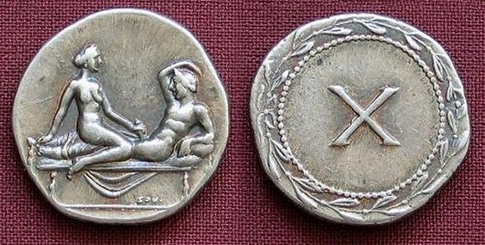 The Roman Empire was criss-crossed with trade routes. There were sea routes that covered the Mediterranean and Black Seas and numerous land routes using the roads built by the Romans. Trade and moving the Roman Army around were the two principle reasons for building roads.

The most important port was Ostia as it was the nearest major port to Rome itself. Ostia was situated at the mouth of the River Tiber and was only 15 miles from Rome. Many ships travelled between Ostia and the major North African city of Carthage, a journey that took between three and five days. Ships also arrived from Spain and France at Ostia. All their goods could be quickly moved to Rome itself as they were taken in barges to the city up the River Tiber after slaves had transferred the products from the merchant ships to the barges. Ironically, Ostia was to play a major part in the downfall of Rome when Alaric the Goth captured Ostia in AD 409 knowing that this would starve Rome of much needed food.

The Romans did what they could to make sea journeys safe - lighthouses were built as were safe harbours and docks. The Roman Navy did what it could to make the Mediterranean Sea safe from pirates.

The Romans made trade as easy as possible. There was only one currency used and there were no complicating customs dues. Trade was also encouraged by many years of peace within the Empire. Trade was vital to the success of the Empire. When the Empire collapsed, trade throughout the lands that had once made up the Roman Empire, also collapsed. The Mediterranean Sea became a dangerous place for merchants as there were no powers to control the activities of pirates who marauded as far north as the English Channel.

What was acquired from where?

Britain exported lead, woollen products and tin. In return, it imported from Rome wine, olive oil, pottery and papyrus. British traders relied on the Romans to provide security within the Empire. When this collapsed and Europe was seemingly overrun by Barbarians, no one could guarantee traders that their produce would get through. Also, without the power of Rome, who would be willing to buy what was produced in Britain and other parts of Europe?